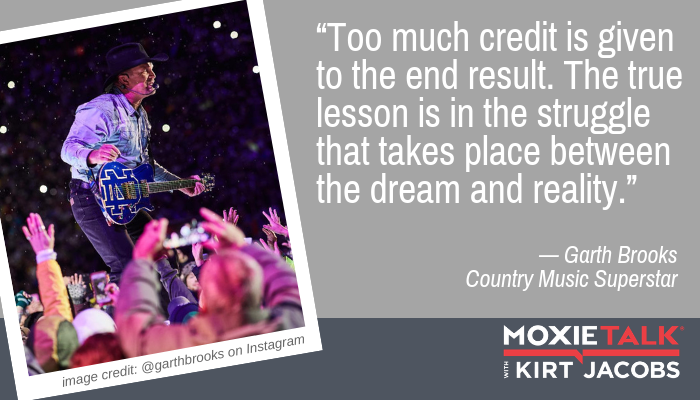 Cold, wind and rain were not entirely unexpected. But snow? That could have been a show stopper.

Those were the conditions superstar Garth Brooks encountered when he took to the stage on Oct. 20 to perform the first concert ever held in the legendary Notre Dame Stadium in South Bend, Indiana.

Conditions were so bad that speakers could not be hung over the stage area. The start of the concert was delayed an hour in the hopes that conditions would improve. When the cold rain turned to snowflakes, the crowd laughed at the absurdity of it.

But Garth Brooks did more than put his head down and play and get through it. He roared through his entire set with the gusto fans have come to expect, living up to the sign every player to ever don a gold helmet has seen upon entering that same stadium – “Play like a champion today.”

It takes moxie to play like a champion in stunningly adverse conditions, and Garth Brooks has it. Here are my insights from his remarkable life and career:

People with moxie get back up and try again.

Like many artists – virtually every artist – Garth Brooks was not an overnight success. He spent years playing clubs in his native Oklahoma and beyond. When an entertainment attorney caught his show in Dallas and offered his support, Brooks made it just 24 hours in Nashville before heading home to Oklahoma.

But Brooks returned to Nashville and began knocking on doors. Over time, those doors opened, and Brooks stepped through.

Precious few people hit it big with their first attempt. Moxie is getting up one more time than you’ve been knocked down.

People with moxie refuse to stay in their own lane.

Key to Brooks’ success is his style and sound. At a time when most country singers stood at a microphone and played music that leaned heavily into traditional honky tonk influences like steel guitar and steady strumming, Brooks brought in rock influences. His tracks throbbed with hot guitar licks and thumped with driving drum beats.

Nowhere was that that rock influence more apparent than his shows. Brooks strapped on a mic under his wide-brimmed cowboy hat and roamed the stage freely, though perhaps roamed is too tame a word – the former college track stand-out charged, prowled, jumped and engaged in all manner of antics aimed at reaching the fans in the cheap seats. Once unshackled from a mic stand at center stage, Brooks unleashed a high-energy show that rivaled any performance put on by Mick Jagger or Freddie Mercury.

Brooks’ genre-obliterating style paid off in a huge way. He’s sold more albums in the United States than Elvis Presley, and is second only to the Beatles in overall sales. Worldwide, he’s sold more than 170 million albums, making him one of the top-selling artists of all time.

Brooks’ might have gotten some disapproving looks from traditionalists who thought he wasn’t “country” enough, but he didn’t let that deter him. To people with moxie, “we’ve never done it that way before” is far from a deterrent; it’s motivation to forge ahead.

People with moxie take a stand, even when it’s not popular.

In the early 90s, long before marriage equality was widely accepted, Brooks was vocal about his support for LGBTQ rights. He recorded the gospel-tinged tune, “We Shall Be Free,” which included the lyric, “When we’re free to love anyone we choose, when the world’s big enough for all different views, we shall be free.”

Country music stations across the country refused to play the song, and it only reached 12 on the charts. It was Brooks’ first song to miss the Top 10.

“‘We Shall Be Free’ is definitely and easily the most controversial song I have ever done,” said Brooks in a later interview. “A song of love, a song of tolerance from someone who claims not to be a prophet but just an ordinary man. I never thought there would be any problems with this song.”

It was far from his first brush with controversy over a social topic. His hit “The Thunder Rolls” tells the story of a battered woman who fights back against her abusive husband. The video, which cast Brooks as the husband, was banned by The Nashville Network.

It would be tempting for Brooks to shun controversy and protect his image and his empire, but instead he’s been willing to use his influence to champion the ideas he’s passionate about. People with moxie are willing to ally themselves with people who don’t have a voice, and speak up even if it costs them.

Are you a Garth Brooks fan? What about his moxie inspires you most?